Well, another 10x10 has come and gone, and once again, it was a fantastic night! Both St. Paul's and the Morrell Meeting Room at Curtis Memorial Library were packed with artists and art-lovers, and people were in a buying mood (artists with last names beginning with the letters A through M were at St. Paul's; L through Z artists were at the library). 104 pieces were sold, making it a successful night for Arts Are Elementary and many participating artists alike!

Doors to both venues opened at 5 pm. Terry and I arrived at St. Paul's at approximately 5:02. "Weathervane, Bowdoin College" was already gone! I was hoping to get a photo of me with both of my paintings, but that's okay- a sale is a good thing! Besides, they did something new this year, which I think is a fantastic idea: they printed out copies of all of the pieces on display, and hung copies behind each piece. In the past, whenever art was sold, a blank wall space would be left behind; this time, you were still able to see what the work looked like even if it was gone! 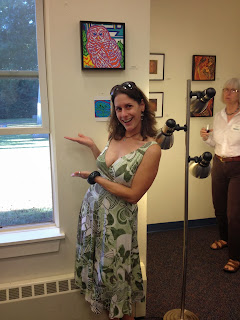 Anyway, right after I walked in and saw that my painting was gone, I ran into Mary Becker Weiss, who is an artist and, among other things, the official photographer for the 10x10 event. Mary told me that Linda, the woman who bought "Weathervane, Bowdoin College", was still there (she was in the process of finalizing the transaction) and she was hoping to meet me. Mary also mentioned that she had told Linda that I was just like my paintings: bright, happy, and radiating positive energy! Well, I'm not sure I can think of a nicer compliment to get as an artist, and I am happy to report that Linda ended up echoing Mary's statement! Linda and I had a lovely chat and I gave her a hug as soon as we were introduced. Mary captured the moment beautifully...in fact, I believe she's calling this photo "Magic Moment": 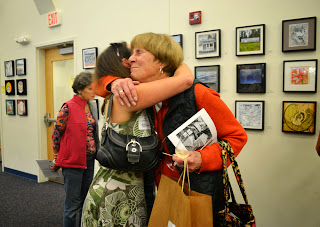 Linda said she bought "Weathervane, Bowdoin College" as a wedding gift for her nephew and his new bride, who are both Bowdoin graduates. How fantastic to have my painting be a part of their new life together!

Well, this was just the greatest way for my night to begin, and it ended up being a really fun evening. I chatted with a bunch of different artists, and although it can be tough to have a long conversation with anyone at an event like this, I feel like I was able to have some really nice moments with several different people. One artist who is a Facebook friend told me she really enjoys my posts, and another artist told me she wore a dress to the 10x10 because she knew I'd be dressed up! Her exact quote: "You caused me to elevate my game!" Everyone was so nice to me, it's a wonder I don't have a swelled head!

Since the 10x10 is this Friday, I figured I would make a list of ten reasons why you should attend this show and buy some art! (www.10x10brunswick.org)

8. You can feel good about supporting a wonderful charity AND a local artist at the same time.

7. It's proven that art can improve children's hand-eye coordination, creativity, concentration, and self-expression.

5. 10x10 art will fit easily into any space in need of beauty. Have a big space? Buy a few pieces!

4. The 10x10 is a fun Brunswick event that people look forward to every year. Be a part of it!

3. Did I mention how fantastic the food is?

2. Friday's forecast is clear, so if you're planning on waiting outside to get in as soon as the doors open, you won't need an umbrella!

don't be afraid of ghosts

Well, the Second Friday Art Walk for September has come and gone. Personally, I had a great art walk: I sold seven magnets (one of which is heading to Louisiana!), and there was a pretty good flow of people coming in and out of my room. Unfortunately, it was a rainy night, and many of the artists slated to be at 98 Maine Street just didn't show up, so it felt a bit like a ghost town. Thankfully, live music by Cumberland Crossing and Shanna Underwood kept everyone's spirits up, and those who were there had a good time. I am really hoping that the art lovers who made it out on Friday night will not let the reduced turnout of artists keep them from attending future events!

I know that it can be discouraging for artists when they put a lot of work into a show and people don't attend (or people attend but don't buy anything). Believe me, I have had plenty of shows when the only people who show up are just there for free food and wine; they don't even look at the art. It's hard, but I feel like it is all part of paying your dues. Getting your work and your name out there one way or another is essential, and there is no such thing as instant recognition. Even the Beatles played tons of gigs where no one was paying attention to them. They kept plugging away, and we all know how that worked out!

There is only one more Second Friday Art Walk this season (October 11th), and then we will have Arts Downtown and All Around the first weekend in December. Let's hope everyone will rally and make these events a success for artists and art lovers alike!

I spent a little time on Tuesday hanging posters for the Brunswick 10x10, which is coming right up. I've said it before, but it's worth repeating: every year, I am impressed by the well-oiled machine that is the Brunswick 10x10. From start to finish, things are organized, efficient, and professional: the drop off/pick up, the website, the advertising, and, of course, the reception. I am hoping to make it to one of the previews this year because I don't want to miss anything! Here is a link to the website: www.10x10brunswick.org . Hope to see you on Friday, September 27th!
Posted by maria at 12:13 AM No comments:

Well, I was able to make it over to Lewiston this week...here is a picture of my magnet display in its new home on the counter at She Doesn't Like Guthrie's! 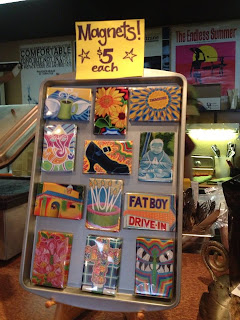 If you've never been to Guthrie's, they have yummy, healthy food, tasty drinks of all kinds, and great music. When you place an order, you stand in front of the register; when there is a line, it runs right along the length of this counter. Things get busy at Guthrie's, so it's not unusual for there to be a line, especially when there's a band performing. When I went there on Thursday morning, Heather gave me some very positive feedback. She said, "The magnets are fun, they're colorful, the display fits perfectly on the counter, and it gives people waiting on line something to look at!" Sounds good to me. By the way, if you're in Lewiston and you're craving an absolutely delicious iced mocha latte, look no further...

Happy September! Yes, once again, I've been remiss in my blogging...well, they say every day is a new chance to get it right, don't they?

I took down my show at Guthrie's on Saturday morning, and I was happy to find out that I had sold several magnets during the month-long stint. When I got home, I sent Heather (the owner) an email thanking her again for the opportunity; today, I got an email from her saying that they would like to continue carrying my magnets even though my show there is over! I am very excited about this, and I'm planning on making a trip up to Lewiston sometime this week.

I had the opportunity to stop into Thornton Oaks a few weeks ago to bring by some magnets of my painting, "Old Fat Boy Sign," since several people there had been asking about them during the opening reception. Sure enough, I sold three of them to staff members almost as soon as I walked up to the office window! Marlise Swartz, the director of marketing at Thornton Oaks, was kind enough to post a photo of my painting to the Fat Boy Facebook page. I don't know how often they maintain this page, but I'm hoping that someone with the Fat Boy organization will come across the photo and get a kick out of it! We'll see.