springing into summer with a recap

WOW...it's been an intense couple of months! Normally, I write these recapping-types of blog posts in a somewhat linear fashion, but this time is a bit different...so here goes! I'll start with what's happening now.

My 42nd Brushstrokes With Impact (tm) "Paint-a-Thon" takes place in just a couple of days! I've had a solo show at She Doesn't Like Guthries in Lewiston for the month of May, and the first Art Walk Lewiston/Auburn of the season is Friday, May 31st - how perfect is that? I've titled this event "Second Helping!" because this is the second time I'll be having a Brushstrokes With Impact (tm) "Paint-a-Thon" at Guthries, and it's also the second time I'll be raising money for the Good Shepherd Food Bank. It's a great cause and a fantastic venue...I hope to see your smiling face on Friday! Here are some photos of the show: 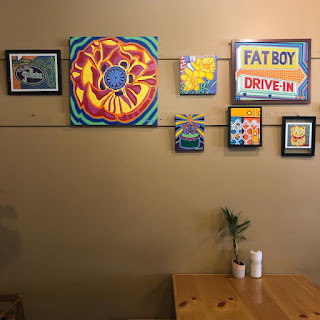 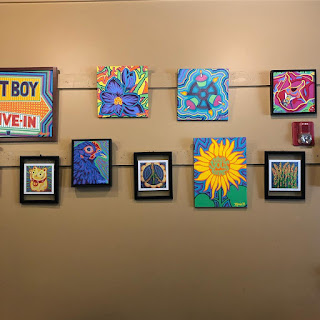 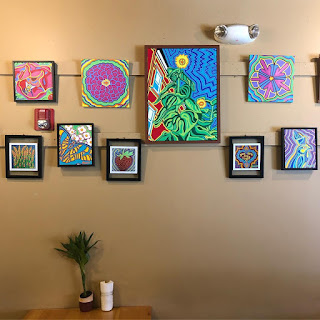 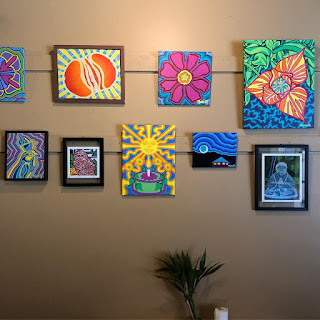 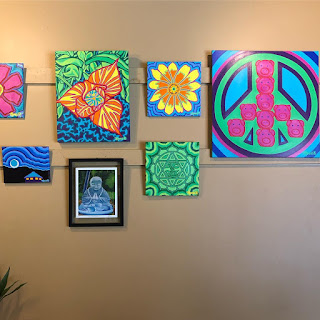 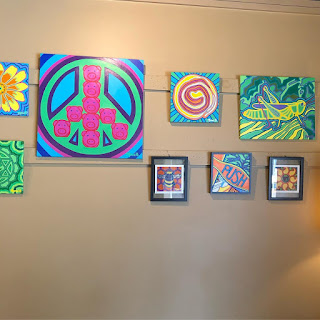 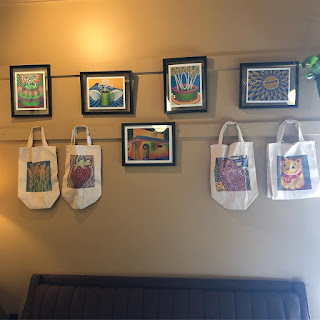 In early April, I was fortunate enough to take part in a week-long yoga/meditation/astrology/painting retreat at the Ghost Ranch in Abiquiu, New Mexico, with the ShivaShakti School of Yoga. It sounds kooky to say that I was out of my comfort zone, because all of those activities are among my favorite things to do, but it's true. The week consisted of scheduled days beginning with Kundalini yoga and meditation in a yurt, followed by breakfast, then yantra painting class (with the incredible Mavis Gewant), then lunch, then yantra painting class, then free time, then dinner, then back to the yurt for astrology class. As soon as astrology class ended, a period of "social silence" would begin. "Social silence" would continue on into the next day, only to be broken after the end of the morning yoga/meditation session. I'd never done anything quite like this before, and I can honestly say this retreat was (and continues to be) a life-changing experience. It's already had a major impact on my artwork: so far, I've created four paintings as a direct result of my time at the Ghost Ranch. Who knows what will happen next?


My 41st Brushstrokes With Impact (tm) "Paint-a-Thon" (entitled "Spring In My Step!") took place on Saturday, April 20th, just outside of Indrani's at the Tontine Mall in Brunswick. I had only been back from retreat for about a week and a half, but I already had a new painting inspired by my time away (which, thanks to the power of social media, was sold before I even had the chance to hang it- a personal record). I knew I wanted to keep exploring the sights, feelings, and ideas I'd been exposed to while on my trip, so the painting I created that day was entitled "Skull, Ghost Ranch". 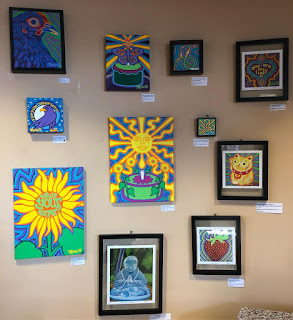 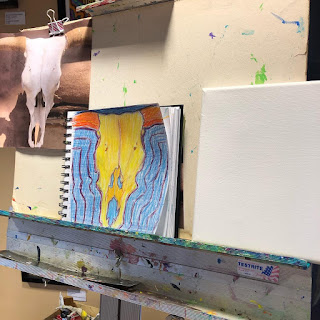 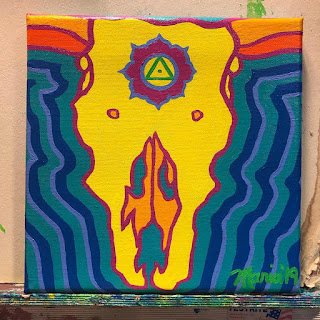 I'm happy to say that the winner of "Skull, Ghost Ranch" was none other than Alex Coombs! Alex is a friend, a collector, and a long-time supporter of Brushstrokes With Impact (tm), and last month was his first time winning a painting! Congratulations, Alex! Plus, thanks to everyone's help, together we were able to raise $140 for the MidCoast Hunger prevention Program's "Backpack Program," which brings the running total raised since December 2015 to around $6000. Hooray! 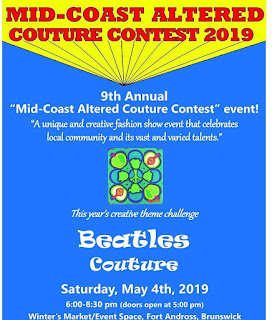 Yes, that's my painting on this year's Altered Couture poster! 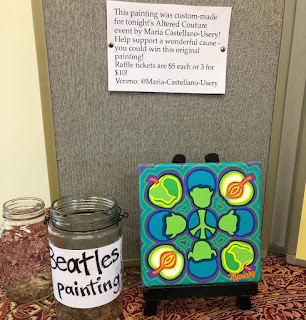 "A Is For Apple, B Is For Beatles" 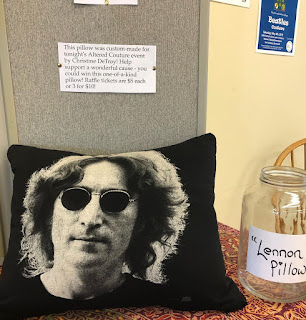 a special pillow made by Christine DeTroy


Altered Couture was on Saturday, May 4th, and boy, was it a hoot! Christine DeTroy pulled it off once again with tons of style and wonderful spirit. This year's theme was "Beatles Couture," which made for an even more fun and lively night than usual. The costumes were incredible, the audience was into it, the participants were joyful and supportive of one another, the DJ was fantastic (as usual), and this year's MC kept the crowd engaged and the energy up...and I'm not just saying that! 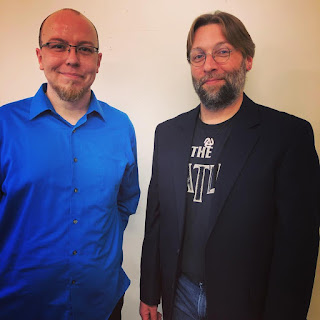 I'm grateful to have had friends and family in the crowd that night, because even though it is fun to "walk the runway" at Altered Couture, it's also a bit terrifying - "fun-scary" is the best way I can describe it - so seeing friendly faces and recognizing friendly hoots and hollers makes life so much easier! Thank you to everyone who made it out! Speaking of friends, I'm very proud of the friends who were in the crowd for last year's event and chose to participate this year! Michael Gamage was the "Sun King" (brought to life with Heather Goulette), and Erica Kingston was "Norwegian Wood," whose costume featured hundreds and hundreds of hand-stained and hand-stitched popsicle sticks. WOW! My costume was made using vinyl and flexible plastic records, CDs, 45 adapters, beads, glue, paper, and 200 safety pins; the song I chose was "The Hippy Hippy Shake". 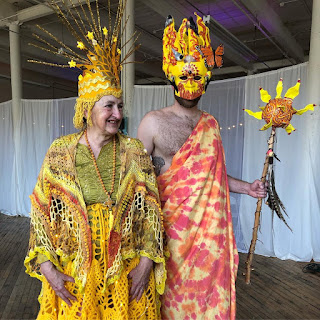 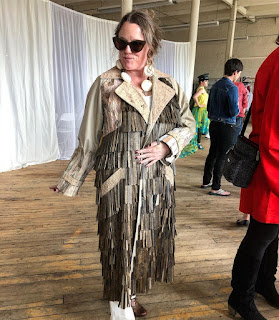 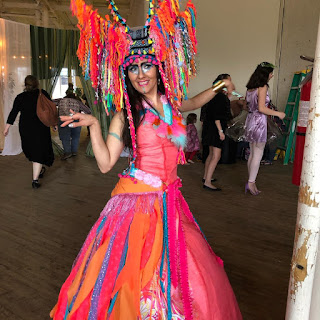 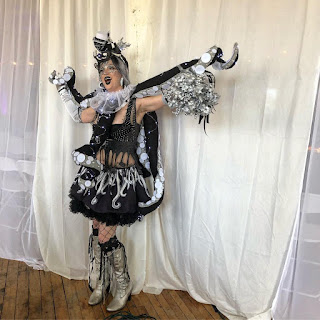 Octopus's Garden - I wish I knew her name - she was fabulous! 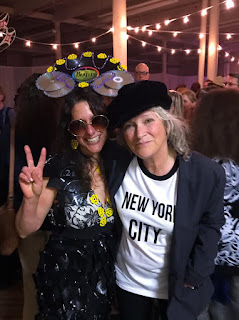 I could fill up this entire post with Altered Couture photos (because I got some fun ones, and there were just SO many incredible costumes and beautiful people who participated), but I'll direct you to my Instagram page if you'd like to see some more: @brushstrokesbymaria!


Finally, I'm thrilled to report that the piano I painted is once again out on the sidewalk in front of Cool As A Moose on Maine Street- a sure sign of summer! Does anyone know anything about the cool campaign that's being promoted in the second photo? If so, please share in the comments section! 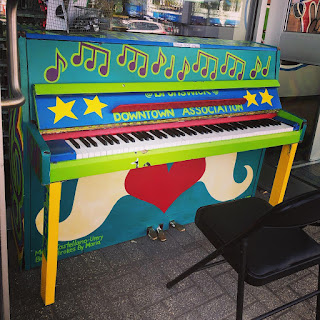 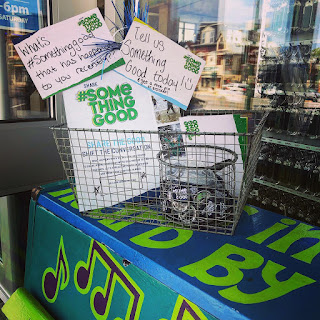