It might be cold outside, but my heart has been warm all month long. On Friday, January 11th, I had my 38th Brushstrokes With Impact (tm) “Paint-a-Thon”. It’s my first event of 2019, and I can honestly say that it has gotten my year off to a big start! 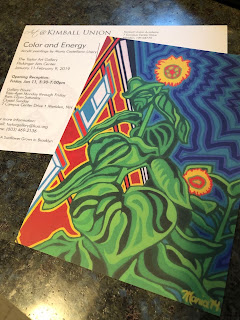 
On Wednesday, January 9th, I drove to Meriden, New Hampshire, to hang my solo show (entitled “Color And Energy”) at Kimball Union Academy’s Taylor Art Gallery; two days later, my “Paint-a-Thon” happened (from 8am-4pm), followed by the show’s opening reception (from 5:30pm-7pm). It was a whirlwind, to say the least! On paper, it was a long day, but instead of being tired at the end, I was energized. I was so wound up, I didn’t want to sleep until the wee hours of the morning! I was originally planning on setting up my easel and painting just outside the Taylor Art Gallery, but KUA’s Ursula (Ursi) Fries-Herfort (Arts Instructor and Gallery Director) suggested the dining hall instead - and I’m so glad she did. On a side note, Ursi also helped me to hang the show, which was huge, because walking into that empty room was intimidating! Anyway, the dining hall at KUA is a major hub for the school community, and it allowed me to connect with students and faculty alike while I was working. Rather than distracting me, the steady hum of conversation and foot traffic allowed me to focus on the painting at hand. It also gave me a strong impression of what life at KUA is like, and I was struck by the culture of kindness that permeates the school. There was a friendly and respectful tone to every conversation I overheard, no matter who was doing the talking: students, faculty, or staff. Everyone who took the time to chat with me while I worked was friendly, curious, and welcoming, and those feelings were only magnified during the opening reception later on. 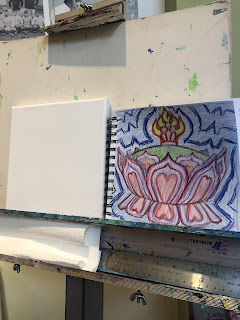 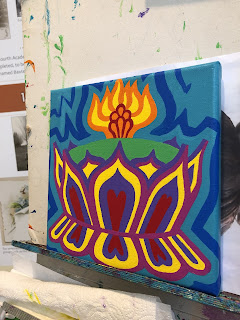 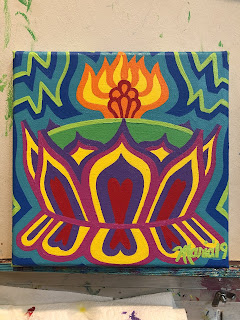 The day of painting flew by, as it always does, and the opening reception was no different. The
turnout was fantastic, especially considering the frigid temperatures! I didn’t take many pictures because I was so busy chatting, but here are a few to give you a sense of what it was like.

The winning raffle ticket was drawn at the end of the opening reception, and despite the fact that I sold a lot of tickets to the KUA community, the winner of “Love Light Lotus” was Rosie Johnson from Arizona. This is the second time Rosie has won one of my paintings, so she has earned official collector status! This month’s cause was the Janie Chase Cozzi ‘19 Memorial Fund...I don’t have an official total as of yet, because the show is still up until February 9th, but as soon as I have that information to pass along, I will do so. 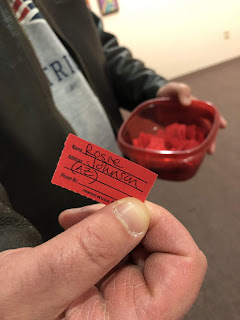 I feel so grateful about my whole experience at KUA. It’s a real treat to have my work on display in such a beautiful room, and it was incredibly gratifying to connect with students and have them “pick up what I was putting down,” if you will. Getting people to leave their warm homes on a cold night isn’t easy, so if you were one of the people who attended the opening, I thank you! I’m also grateful for my brother-in-law, Jerry Usery, not only for making the introduction between me and the KUA Art Department, but also for taking time out of his work day to act as my “pit crew,” helping me to set up and bringing me coffee, juice, and snacks...thanks, bro!

If you happen to find yourself in Meriden, New Hampshire, before Saturday, February 9th, please stop by KUA’s Taylor Art Gallery! 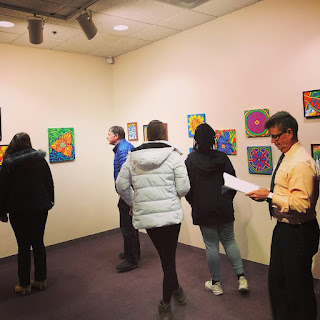 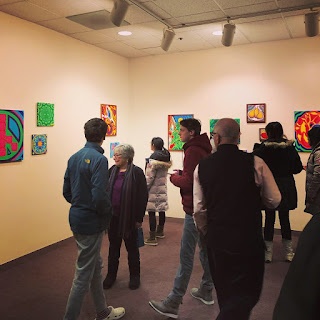 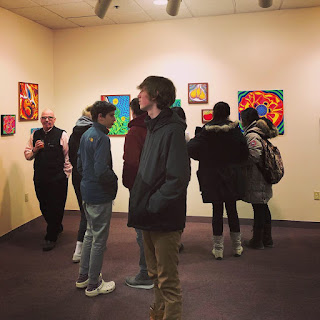 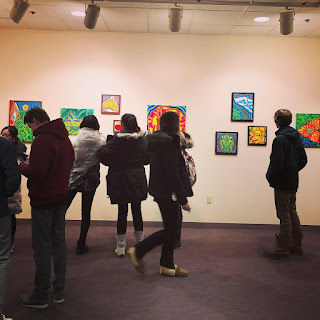