life is not whatnot

Holy cow: June 25th already? This past month or so has been a bit of a blur. A lot has been going on, and I just haven't made the time to sit down and blog about it. I will do my best to recap here!

As many of you know, I have a day job designing custom closets for Closet Factory of Maine (I've been there since September 2002). Well, at the end of May, I had a "first" happen: a client who bought a closet from me also bought a painting from me! I've had clients buy magnets before, but never a painting...so thank you, Kristen and Zach, for giving "Prentiss' Owl" a good home! You now officially have the title of "best clients ever" in my book. Here's to a first!

May 29th was the first Art Walk Lewiston/Auburn of the season, and it was a fantastic night: a great turnout, beautiful weather, and lots of sales! I was set up at 46 Lisbon Street, which used to be a bridal shop. The former tenants left behind a plethora of rental shoes, so the building's new owners, Kevin and Diana, turned them into an art walk attraction! They lined them up along the sidewalk and into the building, and boy, did they get attention! People kept stopping to take pictures of the shoes, and no one seemed to believe it when they were told they could take home a pair free of charge. 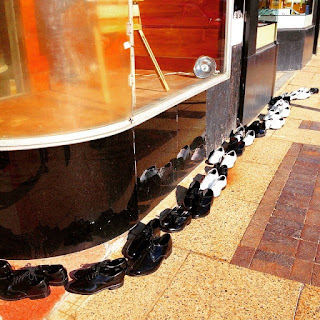 People were out and about in Lewiston, soaking up the art, the music, and the sunshine. I sold a bunch of magnets, as well as a signed/numbered giclee print of "Imagine Memorial, NYC". I know that print went to a good home...check out the buyer's wallet! Art Walk Lewiston/Auburn happens again tomorrow night, and the forecast looks good! Perhaps I will see you there! 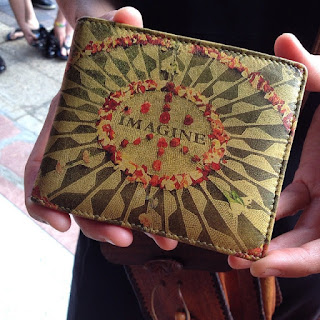 How perfect is that?

The biggest news for me from this past month, though, is "Things/Life/Whatnot," my two-woman show with Sarah Brayman at Frank Brockman Gallery in Brunswick! If you are local and you haven't been to Frank Brockman Gallery, make the trip. The space is absolutely beautiful (and HUGE!), and I feel very fortunate to have my work hanging there. I love Sarah's work as well, and I think our stuff looks good together. The show opened on June 3rd and runs through June 30th, so you still have time to see for yourself. (By the way, "Things/Life/Whatnot" took three days to hang, and I'd like to take this moment to send a very large thank you to my husband Terry and his best friend, Alex, who schlepped my work from the house, into the car, and up three flights of stairs!) The opening reception was Friday, June 12th, and it was flat-out awesome! The place was packed shortly after 5pm, and things didn't start slowing down until around 7:30. Both of us sold work that night, and I even had a couple of painting sales several days before the reception! The art, the food (including my sister's homemade brownies and cinnamon shortbread), and the music were all well received (Pretty Girls Sing Soprano performed, and they were fantastic, as always), and the night went by in an eye-blink. I barely had time to take any photos, and if you know me, that's saying something! Check out the event page on Facebook for pre-reception photos of the show. 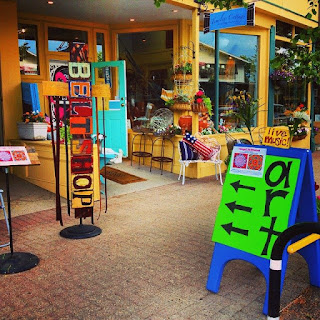 all signs point to awesome! 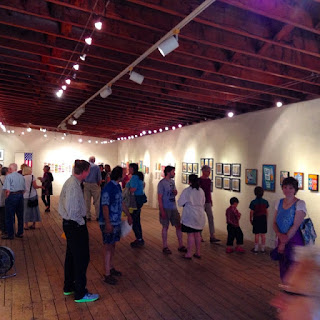 It feels really good to have had a fairly joyful and celebratory month, especially considering the way May began for me.  I am grateful for all of the friends and family who have been on this journey with me, helping me through the rough times and rejoicing with me through the fun times. Thank you...and here's to more of the latter rather than the former!