three is a magic number 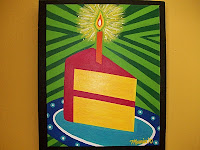 My work is going to be on display in three different places during the month of May! Tomorrow, I will be hanging a solo show at North Star Music Cafe in Portland (http://www.northstarmusiccafe.com/; thanks to Katie "Megaphone" Diamond for all the help!); this show will feature both paintings and collages and it will run through the entire month. When I emailed out announcements for this show, Lia from the Community Wellness Center in Farmingdale responded with an invitation to participate in her next show, which begins next week and will run for about two months (I will have at least one painting on display and a few collages...I still have to decide which ones). I have also donated a painting (entitled "Slice", which I have posted a photo of here) to the Big Brothers Big Sisters fundraising auction (thank you, Tania, for the opportunity to participate), and that one-night event takes place next week as well. In fact, the opening reception for both shows and the auction are all on the same day: Friday, May 7th! I can't be in three places at once, naturally, but I will be at the North Star that evening, enjoying the wonderful food and wine they have there...and enjoying being a part of Portland's First Friday Art Walk.
Posted by maria at 6:32 PM No comments:

are we there yet?

I signed a painting yesterday. I don't know what took me so long to do it. I hadn't touched it in well over a week, and it wasn't because I needed to step away from it for a bit. I knew it was done, but a small part of me doubted myself. I have another painting that I'm pretty sure has been finished for well over a month, yet I haven't been able to bring myself to sign it. I look at it and I am happy...there's nothing I would change. Why does it take me so long to take that final step sometimes? What am I so afraid of? Does anyone else have this problem? Usually I just listen to my gut feeling to determine if a painting or a collage or any other piece of artwork is finished and that seems to work for me, but after I have made the decision that my work is done, why is there still a hold up on that final finishing touch? It always feels good to sign a piece, so why not go for it if the time is right? I need to nip this behavior in the bud, pronto. I will sign that other painting tomorrow...I feel better already.
Posted by maria at 10:21 PM No comments:

it's all in how you look at it

I haven't blogged in a couple of weeks now, but it's not because I haven't been thinking about it. I was gone for a little while and that particular trip involved doing a lot of driving in a short amount of time; when I finally got home I was more tired than I realized and am only now starting to catch up. I went to Virginia (via New York) to witness my brother Frank's Change of Command. You see, my brother was the Commander of the USS Bainbridge, the ship that rescued Captain Richard Phillips from Somali pirates last year right around this time, so going to this particular Change of Command was kind of a big deal. I snapped pictures like a crazed tourist, posed in chairs I had no business sitting in, cheered at inappropriate moments, high-fived Naval officers wearing white gloves and dress blues, and generally had a lot of fun. I even got to meet a real-life hero, Captain Phillips himself (or "Rich", as he prefers to be called), his lovely wife Andrea (an ER nurse), and her sister Lea (a talented photographer and ferry captain). Combine all of this with some quality time with family members I don't get to see often and you have the makings of a very memorable couple of days.

I have never thought of the Navy as anything but an organized, disciplined group of men and women who sacrifice their lives for the benefit of our country. I found out two new things about the Navy during my trip: one, they put on a really nice spread when you're a big shot; and two, if you look at it in the right way, you can find beauty on a destroyer. Yes, I know that seems strange. The words look odd even as I read (and re-read) them. Beauty? On a destroyer? It's true. I took a lot of pictures of the ship while I was on it and next to it, and I have to say, they look pretty cool. The angles, the lines, from a purely compositional standpoint, are really striking, like a sculpture or a fine automobile. I'm willing to bet that Rich found beauty in the Bainbridge on that Easter Sunday last year. Will I try my hand at a painting or a collage based on my impressions that day? That might be a fun challenge. I don't know if the feelings I experienced will be able to adequately translate, but I suppose there's only one way to find out.
Posted by maria at 11:12 PM No comments: