This month's First Friday was great! The turnout was even better than last month's, and I got to spend some time with people I care about (thanks to Erica, Rebecca, Andy, and Terry for hanging out). Last time I just had paintings on display, but this time I did both paintings and collages, and people really seemed to respond to the eclectic mix of work. Not only did I get positive feedback regarding what was on the walls, but a couple of people commented favorably on the music I was playing as well! I'm also happy to say that I was able to get not one, but two of the paintings I mentioned in my last post finished in time for the show.

I believe one of the reasons for the improved turnout was the sandwich board sign I was able to put out on the sidewalk. Erica was kind enough to loan the board to me, and I attached some bright yellow posterboard with the word "art" and some arrows painted on it. As the evening was coming to a close, I went outside to bring the sign in...and I noticed that someone had stuck some greenery on it! I thought that was so sweet, and it really was a nice touch. It made the sign so much more welcoming and friendly-looking, and I just had to take a picture. I'll make sure to pick up some fake flowers and greenery of my own for next month's Art Walk! 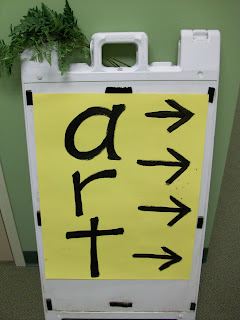