My 10th Brushstrokes With Impact (tm) "Paint-a-Thon" was on Friday, September 9th, and it was a whirlwind of a day! I was at Curtis Memorial Library from just before 9am to just after 8pm...on paper, it looks like a long day, but from my standpoint, it went by ridiculously quickly!

I stopped by the library on Thursday to drop off food for my opening reception in hopes of making things easier on myself (and my husband Terry, who was being tasked with setting up the food/refreshments table due to my packed schedule). I passed by the entrance and noticed the sign with the hours posted: the library was scheduled to open at 9:30am, not 9am. Whoops! I found Melissa Hall and explained my dilemma, and she was quick to help, saying that either she or Michael Gorzka would let me in early so I could set up and start painting by 9am as planned. WHEW! I'm grateful for the entire staff at Curtis Memorial Library for making me feel so welcome (special thanks to CML volunteer Jo-An Jacobus for helping me to number my work at the last minute). I was even greeted with a flower first thing in the morning! 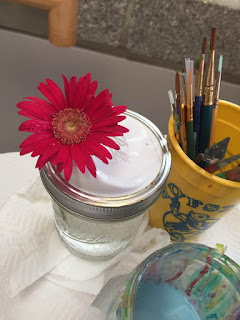 What a nice way to start the day!


I hadn't done much sleeping in the days leading up to Friday's Brushstrokes With Impact (tm) "Paint-a-Thon," but running on pure adrenaline sometimes has its perks: I actually finished "Black-Eyed Susan" early! 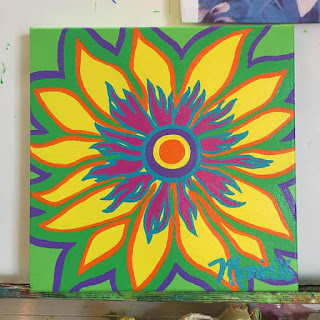 The opening reception that night was filled with friendly faces and awesome music. A new five-piece band was formed out of a jam session, and they have a great name, too: Fat Boy Drive In! 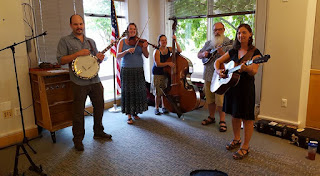 for your listening pleasure: Fat Boy Drive In!

Michael Gorzka was working overtime for sure! He took video footage throughout the day, and locked up the Morrell Meeting Room that night...good thing, since the last time I had a solo show at Curtis Memorial Library and tried to lock up, I set off the alarm! Thanks, Mike! Here's a video from early in the day:

...and here's a video of the winning raffle ticket being drawn:

The winner of "Black-Eyed Susan" is Amy Mullin! This is rather fitting, because not only has Amy supported every single one of my Brushstrokes With Impact (tm) "Paint-a-Thon"s, she is a librarian! Thank you, Amy...and thank you, Rebecca Boothby Conley, for doing the ticket-pulling honors (and for playing such beautiful music with Eileen Armstrong and the rest of your new band, Fat Boy Drive In)! I'm thankful for everyone who bought a raffle ticket, or attended the show, or helped me to promote the event. You are all appreciated!

If you weren't able to attend the opening reception, you've still got time to see the show: it will be up through Tuesday, September 27th. I don't have a fundraising total as of yet, because in addition to splitting the raffle ticket proceeds, I will be donating 10% of all art sold at this show to a worthy cause: Curtis Memorial Library! In the meantime, here are some photos...and wherever you are, please support your local library! 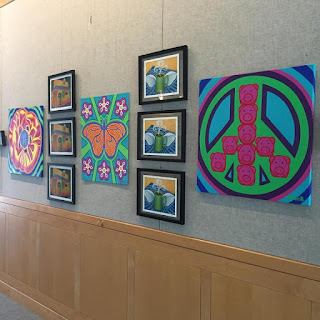 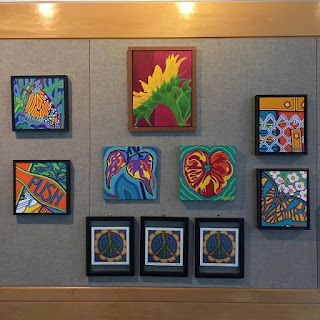 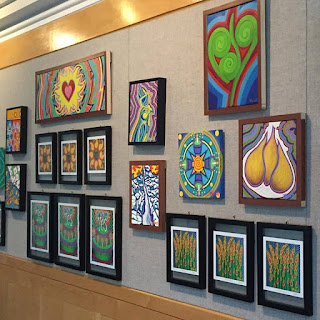 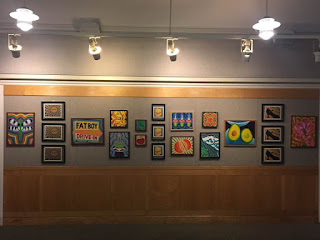