This is a picture of my brother-in-law Marc's office. He is a patent attorney in Boston, and he bought "Rocks, Gloucester" from me last summer. It finally got hung today (he wasn't allowed to do it himself) and I wanted to post a picture of my painting in its new home. Check out the view of the Charles River! 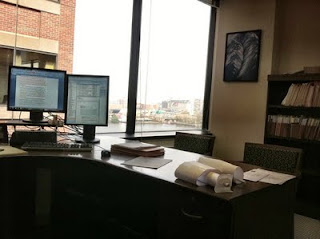 I parted with another painting today, "Flea Market Buddha". I have to say, it's a little weird selling a painting. It's SO exciting and great and thrilling, but there IS that moment when you think, "I'm never going to see this again..." but the good stuff far outweighs the separation. I know "Flea Market Buddha" is going to a good home where he will be appreciated by lots of new people. Plus, I have great photos, and that painting will always be a part of me, no matter where it goes (just like any artwork I've made). The woman who bought it, Jenny, is very nice, and she told me that this is the first painting she's ever purchased. What an honor! I consider it a major compliment when people connect with my work, especially when someone feels strongly enough about it to put it in their home...and then to be someone's first on top of that?! Quite a bonus. I hope "Flea Market Buddha" witnesses many wonderful events in Jenny's life (and the lives of those she cares about). Bon voyage!
Posted by maria at 11:00 PM No comments:

Good news: I just learned that the bowl-painting fundraiser that the Brunswick Art Collaborative participated in raised $1500 for the Gathering Place (Brunswick's new day shelter) and the Women's Alliance! Many thanks to Heather Gelwick for letting us know about the cause, and for bringing all the supplies (and then firing all the bowls) to make our participation possible. Tomorrow night will be the next meeting for the Brunswick Art Collaborative, so I'm sure this will be a big topic of discussion. I wonder if this will inspire our group to get involved in other causes in the future? By the way, the Brunswick Art Collaborative is open to anyone who would like to join us! We meet on the second Tuesday of each month from 6 pm to 8 pm in the art room at Thornton Oaks in Brunswick. Bring along some art supplies to use (and to share) and have some fun!
Posted by maria at 12:53 PM No comments:

it's not nice to fool mother nature

Ah, April Fool's Day in Maine. Mother Nature had quite a prank up her sleeve: heavy, wet snow mixed with rain. Now, I have to say, I have totally been at peace with all the snow we had this winter (thanks to snowshoeing, which has completely turned my head around). That being said, when I heard the forecast for this storm, I freaked a little bit. "First Friday?! Why does it have to be on First Friday?" I started begging for different scenarios. "Well, maybe the wind will shift and there will be nothing, or maybe it won't be as bad as they're saying, or maybe it will all be over on Thursday, or maybe it won't start until after Friday night."

Friday morning came and so did the snow, but I heard birds- and I took that as a good sign ("if the birds are out, it can't be that bad, right?"). I planned on still having my opening, but I was a bit worried about the drive. Schools were closed, state offices were closed, various events were cancelled, etc. I decided to head out just before 3:30 and said to myself, "Well, if the roads are bad and it seems dangerous, I'll just turn around and go home." I got on the road and I was pleasantly surprised. The highway speed limit was down to 45, but the roads were just wet (not icy) and people were flying past me. I got to Portland a lot faster than I thought, and again, I was pleasantly surprised at how clear the sidewalks were. I set up the food, the wine, the battery-powered candles, and my signs as usual and hoped I wouldn't spend the entire night alone reading the book I packed (just in case).

I am very happy to say that the turnout was pretty darn good, all things considered! The people who came were happy to see me and lamented that many galleries had closed due to the weather. They all said it wasn't nearly as bad as it had been earlier in the day, and many mentioned that they were feeling stir-crazy and were happy to have the Art Walk as an excuse to get out of the house. I met a lot of nice people, had some good conversations, and got a lot of positive feedback on the new show. There were lulls, of course, but all in all, I'm really glad I opened. Thanks, Mother Nature, for at least making things better by the late afternoon! Perhaps that was my reward for not complaining about the snow all winter...
Posted by maria at 10:00 AM No comments: